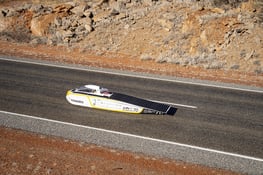 The team, consisting of 45 students from the RWTH Aachen and the FH Aachen, introduced the Covestro Photon during a Livestream event on August 2. The new car includes 578 individual silicon solar cells and achieves a top speed of 120 km/h. However, top speed takes a back seat to efficiently covering the many kilometers of the racecourse, as recounted by the FH Aachen press office, explained team leader Timon Elliger during the Livestream presentation. He added that the new car includes only three tires instead of four on the previous version—a reduction that will boost efficiency because every single wheel contributes resistance. In addition, the team developed software that optimizes the car's acceleration by following the varying conditions of different sections along the course.

“AMETEK Programmable Power is proud to support Team Sonnenwagen Aachen,” said Dan Donati, Vice President, Marketing and Business Services. “AMETEK Programmable Power has many solutions for renewable energy applications, including solar-panel simulators and electronic loads. We are pleased that our Asterion DC power supplies are playing an important role in the development and operation of the new Sonnenwagen. We wish the team success in Morocco.”

Kai Smit, Head of the Electrical Department, Sonnenwagen Aachen e.V., discussed the team’s use of the Asterion DC programmable supply in an email message. “We develop various components of our electrical system ourselves—namely the battery, electric motor, and even a traction inverter,” he said. “In our testing process, reliable and variable power supplies are crucial. While we need high power for fast battery charging, precise and fully customizable power supplies help us to determine the efficiency of our solar-generator setup. The handling of the Asterion DC is self-explanatory and fast. One of its biggest advantages is the full programmability and the options for automating test routines remotely.”

When asked how important partners like AMETEK are to the team, Smit said, “As a team of full-time students, we are dependent on the support of our valued partners. The exchange with established companies is always very exciting, and we get to know and use complex instruments that are out of reach for most people. Every partner helps us with their products and knowledge and contributes to the ever-increasing performance of our next Sonnenwagen.”

Instead of heading to Morocco in October, Team Sonnenwagen Aachen planned to compete in the 16th edition of the Bridgestone World Solar Challenge (WSC) this fall in Australia. But the event has been canceled this year because of border closures resulting from covid-19 pandemic restrictions. The team last participated in the WSC, typically held every two years, in 2019. The team reports that unfortunately, the Sonnenwagen left the track and rolled over several times at one point in that event. The driver was unhurt, and in several hours the car was fit to race again, allowing the team to finish in sixth place and to win a safety award.

Smit summarized the team’s experiences as it prepares to compete in Morocco this fall. “The development and production of a prototype car is very exciting,” he said. “We can utilize our theoretical knowledge from university and engage ourselves in the design of complex electrical components, even before we start our career. During the production, we grow together as a team and collect valuable experience not only as colleagues but as friends. Aside from the technical challenge, it is fulfilling to be part of a prestigious project like Sonnenwagen and promote alternative mobility concepts as well as solar energy!”