What is crest factor and why is it important?

The crest factor of an AC current waveform is the ratio of waveform's peak value to its rms value:

Some loads, such as switching power supplies or lamp ballasts, have current waveforms that are not sinusoidal. They draw a high current for a short period of time, and their crest factors, therefore, can be quite a bit higher than 1.414.

Figure 1 shows current waveforms for two different loads, one sinusoidal (the blue trace) and one non-sinusoidal (the red trace). Both have an rms current of 5A, but as you can see the crest factor is quite different. 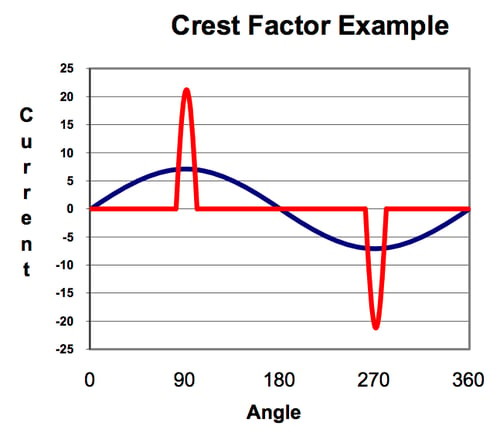 These two waveforms both have an rms current of 5 A, but their crest factors are very different.

As you would expect, the sinusoidal current waveform has a crest factor of 1.414:

The non-sinusoidal current waveform, on the other hand, has a peak value of 21.21 A. The crest factor for this waveform is then:

Why is crest factor important?

In the examples shown in Figure 1, both loads draw the same amount of true power (assuming that the input voltage is the same for both). This means that a power source selected to feed the loads at 120VAC would need to provide the 600VA that both loads require.

A power source with a power output rating of 600VA may not, however, be able to provide the required peak currents that the non-sinusoidal load demands. When selecting an AC power source to power this load, you would need to choose a source possible of supply more than 21 A of peak current. In order to determine whether or not an AC source can handle high crest factor peak currents, look for the “peak repetitive current” or “crest factor” specifications in a power source's spec sheet.

The California Instruments i-iX Series II is a good example of an AC power source that is designed to handle high crest factor loads. The i/iX Series II AC sources can drive difficult nonlinear loads, such as switching power supplies, with a crest factor of up to 5:1, with ease.