Actuators that operate aircraft flight-control surfaces undergo extensive ground tests before they take to the sky. The electrohydrostatic actuators (EHAs) used on the F-35 joint strike fighter serve as examples that illustrate the test challenges involved. 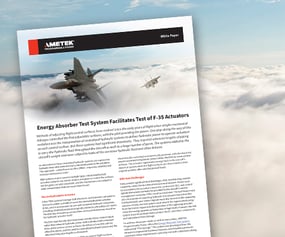 In flight, each EHA, located near the surface it’s controlling, draws electrical power from the aircraft to run its own self-contained hydraulic subsystem, which in turn drives the control surface. During normal operation, the surface is often driven back to its original position, causing the actuator to release regenerative energy that the aircraft power system absorbs.

For such applications, AMETEK Programmable Power offers the Energy Absorber Test System, nicknamed “The Sponge” because of its ability to soak up regenerated energy when the test system’s opposing actuator operates. Read the white paper Energy Absorber Test System Facilitates Test of F-35 Actuators to learn more about the system and how the company’s Engineered Solutions business can tailor one to your exact needs.